The concept of restoration of residential and commercial houses No. 12, No. 14, demolition and construction of a residential house at No. 16 with development on the Bolesława Chrobrego Street. Competition area is located in the Old Town area in the center and is part of the quarter within the streets Bolesława Chrobrego and  Garncarska on the Ina river channel. The concept includes the development of the quarter allocated for housing TBS.

The concept is to restore the spatial, aesthetic and functional historic pre-war tenement buildings, the interior streets and courtyards.

Project Area in the context of the Old Town

Old Town in its downtown building  structure connects now functions of public utilities and functions of multi-family building housing estates. The conflict between the two functions is the main problem of this area, which negatively affects the standard of the central part of the city. There is a right to seek to improve the downtown area through compaction and restoration of peripheral quarters building and providing diverse services program, but so far under-utilized potential of the space inside the quarters and other public spaces. We propose revitalization of the quarter by cleaning and utilization of green courtyard inside with  recreational functions addressed to residents, such as playground spaces, spaces for games designed relax places. This treatment will improve the standard of living of the people living in the area, and development of public spaces such as the riverside boulevard, complement avenues  of green along the pedestrian and driving paths connecting old town with the river will increase the attractiveness of this place in a broad context, complete the range of services in  the city center and integrate this part with the city.

The inner courtyard is at the moment, like many quarters, neglected space with outbuildings and a messy floor. We plan to improve the quality of existing space by cleaning out random outbuildings, garages, parking spaces. Our actions are designed to create a welcoming space for both residents of the apartment, as well as leisure.

Townhouses 12.14
Given the nature of the existing buildings and their historical decided to treatments slightly interfering in their structure.

Elevations are worn and dirty, but having cornices and bands around the windows on the front façade, require renewal and reconstruction in accordance with the guidelines of the conservator with new plaster restoration. It is planned to perform the repair of the facade under the control of the conservator and reproduce as faithfully as possible the state of the historic facade.
On the facades we propose the use of pastel colors, with a basis of intense pigments known from history, such as ocher (gold color) and cochineal (dye dark red). Once all of these pigments have a natural origin. They were as expensive as gold. From two hundred years are obtained synthetically, so they are already more accessible, but still speaks to us of the importance of symbolizing dignity.

Tenement 16 of Annexe
Tenement 16 will undergo demolition. In its place we offer structure, which retains the cubic capacity of the existing building, its main divisions, the rhythm of windows and doors with the addition of a new facade on the blank gable wall. We maintain the principle of gradation typical tenement houses – windows on the top floor utility are smaller, more slender. We used the details of windows referring to the historic facade, rich in cornices, window bands and tympana at 1.piętra, which is a contemporary interpretation of these historical details, in the form of window bands made of sheet steel. We also offer restoration of rustication on the ground floor, some minor cornices and parapets massive cornice zwieńczającego townhouse – referring to the building 12 With these treatments house takes urbanity and dignified expression. The facade has been enriched by balconies with openwork balustrade of detail v, both in the original location from the street. Boleslaw the Brave, as well as new side channel and the inside of the quarter.

The annex building 16 is reminiscent of the existing building vis-?-vis the draft, the other side of the quarter. We refer to it through the use of red brick on the facade, the rhythm of openings and a flat roof. Bricks from demolished building 16 could be recycled and used in the construction of annexes such as insulation material, depending on the state of the material.

Annexe 12, 14, 16
In place of the demolished garages are planning the annexe building, in the form of three new buildings two-storey high, which bind to a sequence of houses  by simple annexe block facing the front of the channel. Divisions buildings ran as geodesic boundaries, with reference to existing houses. Due to the difference of land designed annexes are cascaded descending towards the river.
Annexes masses by  its height, the shape of the roof and his character relate to the existing historically outbuilding by the used material and the size. Their mutual position closes the quarter and clearly arrange the space.
We propose the architecture that is reminiscent of the historic buildings of the old town, associated with farm buildings, timber-framed structure, through the use of brick and wood. Simple rhythmic division of the façade devoid of unnecessary detail gives a character typical annexe buildings, forming the background of stately tenement houses. 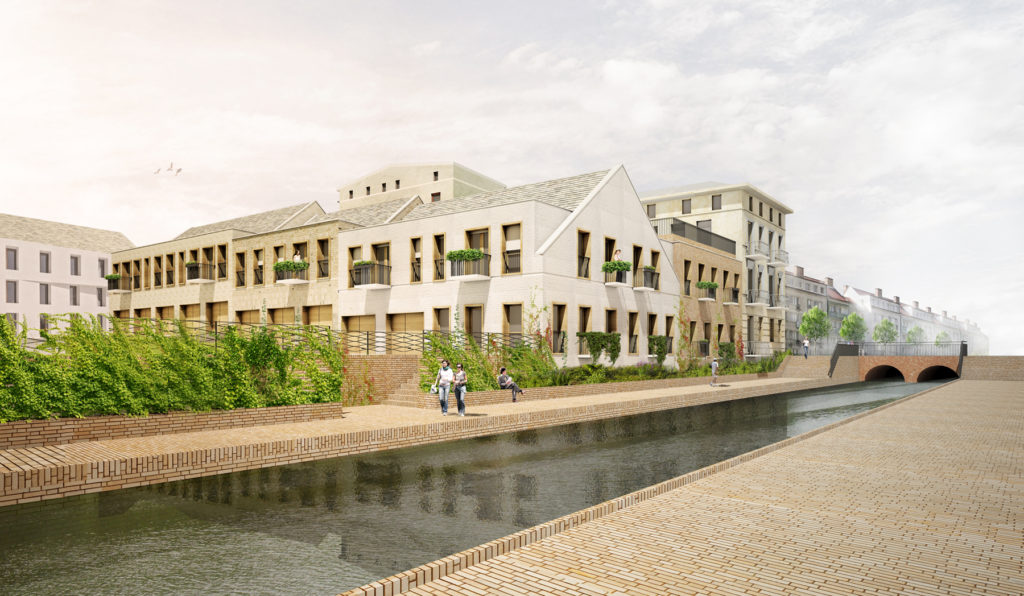 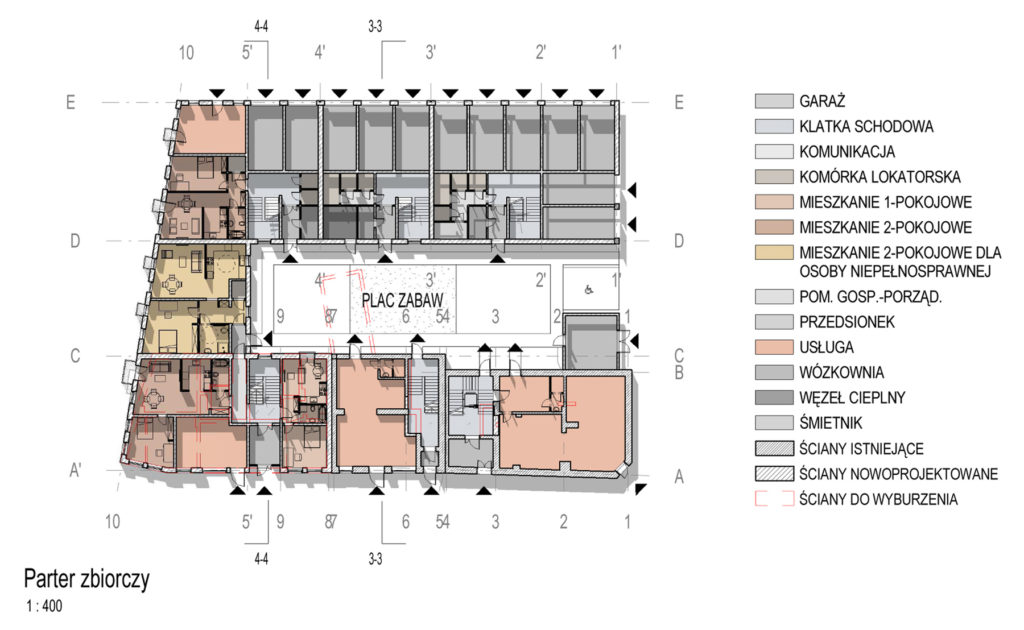 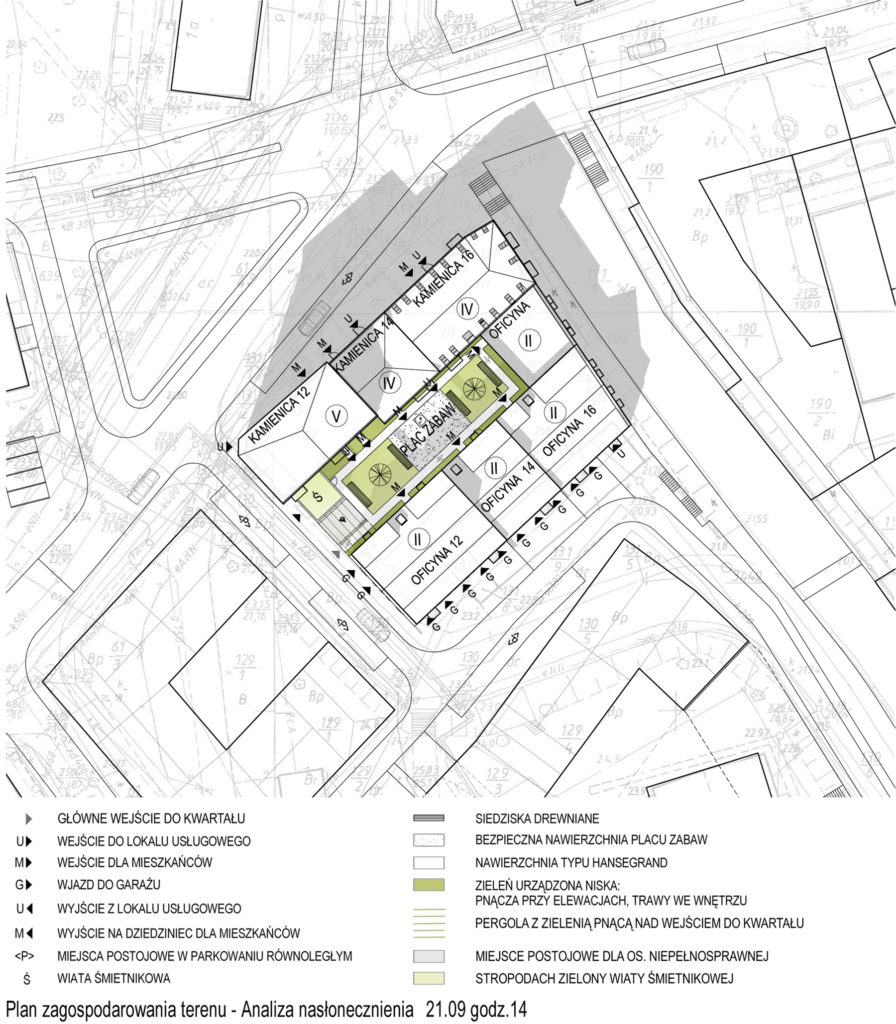 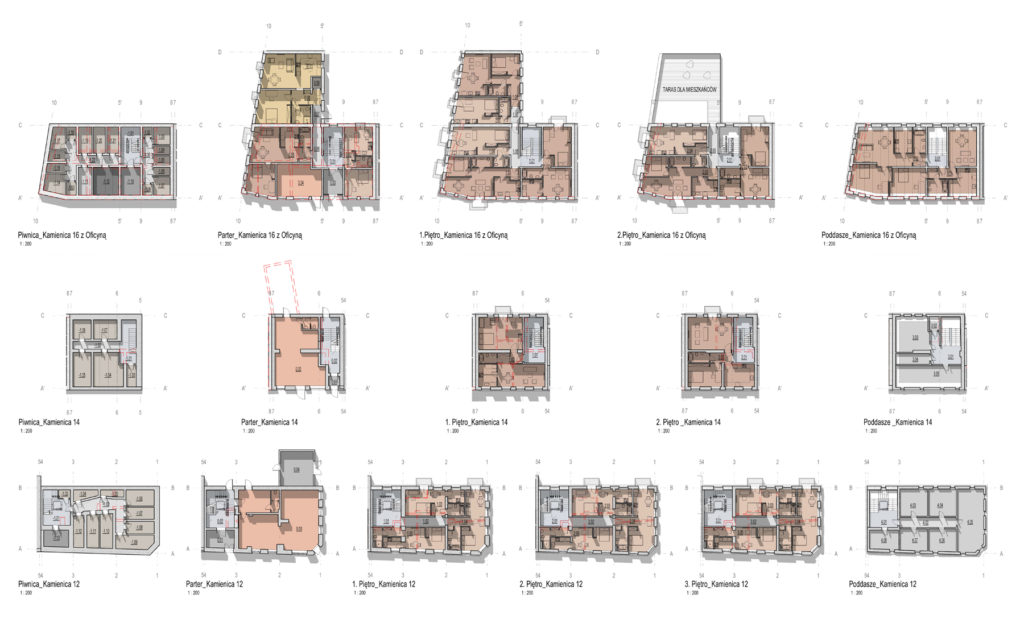 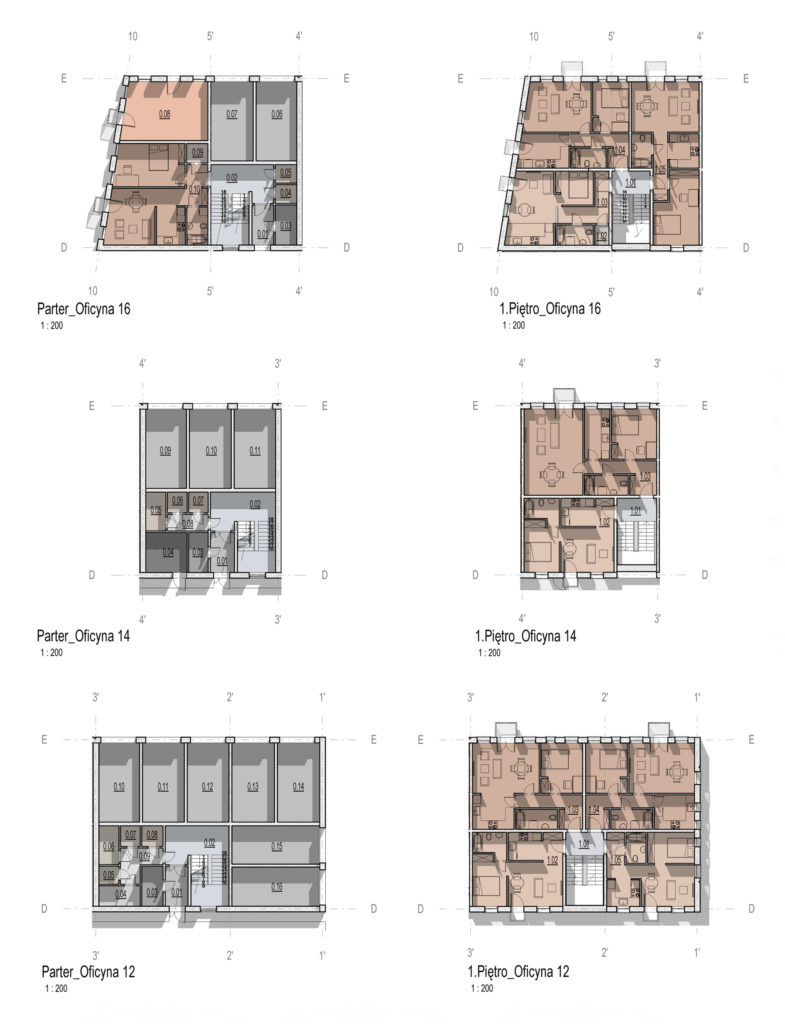